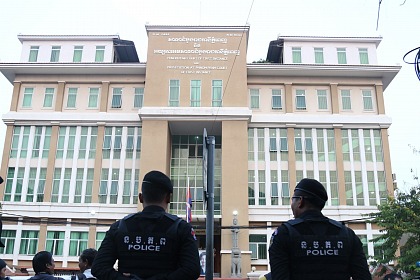 January 16, 2020 - We, the undersigned Cambodian civil society groups, call on the Phnom Penh Municipal Court to ensure that the long-awaited trial of former opposition leader Kem Sokha is open to the public, independent media outlets and the full participation of civil society organisations. We also call on the court to record and broadcast the trial proceedings live, as they have done in the past. Kem Sokha’s trial on charges of “conspiring with a foreign power” – for which no credible evidence has yet been made public and which carries a sentence of up to 30 years in prison – is of significant public interest both to Cambodians across the country and those living overseas. 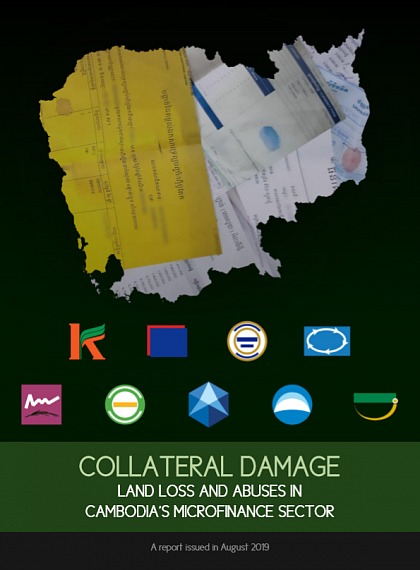 August 7, 2019 - More than 2 million Cambodians currently have a loan with a microfinance institution, or MFI. Levels of debt have skyrocketed in recent years, leading to a number of human rights abuses, including coerced land sales, child labour, debt-driven migration, and bonded labour, according to a joint report from the Cambodian League for the Promotion and Defense of Human Rights (LICADHO) and Sahmakum Teang Tnaut (STT), two Cambodian human rights NGOs. Collateral Damage: Land Losses and Abuses in Cambodia’s Microfinance Sector details the size and scope of Cambodia’s MFI sector and seeks to highlight the human rights abuses that researchers discovered. The research spans 10 communes in 4 provinces as well as Phnom Penh and features seven detailed case studies of abuses, chosen from the 28 MFI clients who suffered human rights abuses that were interviewed by researchers. 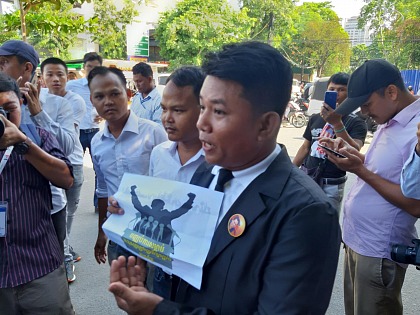 July 12, 2019 - We, the undersigned civil society groups, denounce the unjustified use of security personnel during the third anniversary of political commentator Kem Ley’s death and call for the immediate and unconditional release of two activists, Kong Raiya and Soung Neakpaon, from detention and the dropping of all charges against them. Both men were arrested for peacefully exercising their freedom of expression while commemorating the anniversary of the death of political commentator Kem Ley, who was murdered on 10 July 2016. Shortly after their arrests, both men were charged with criminal incitement under Articles 494 and 495 of the Criminal Code and are being detained at Phnom Penh’s Correctional Center 1. 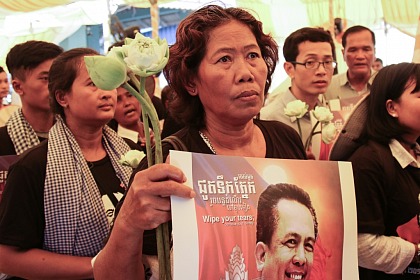 July 9, 2019 - Today, on the third anniversary of the killing of prominent political commentator and human rights defender Kem Ley, the 24 undersigned organizations renew calls on the Cambodian government to establish an independent and impartial Commission of Inquiry to conduct a thorough and effective investigation into his killing. On 10 July 2016, Kem Ley was shot and killed while having a morning coffee at a gas station located on Monivong Boulevard in central Phnom Penh. This killing occurred amidst a backdrop of attacks on human rights defenders and members of the political opposition, and a documented history of killings of human rights defenders with impunity in Cambodia. 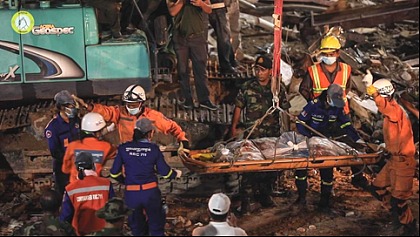 July 2, 2019 - We, as workers, communities, associations, trade unions, civil society organisations and human rights defenders working for the promotion of human and labour rights in Cambodia, extend our heartfelt condolences to the families of those who lost loved ones in the tragic deadly collapse of an under-construction seven-storey building in Village 3, Sangkat 4, Sihanoukville Province on 22 June 2019 at 4:00 a.m. We are grateful to the mixed rescue team for their persistent efforts to locate victims during the critical sixty hours of searching. As of 27 June 2019, at least 28 construction workers were confirmed dead, including five women and rescue teams had pulled out another 26 injured. Amongst the injured were two 16-year-olds, a girl and a boy. All victims are now at Preah Sihanouk Referral Hospital. The victims were migrant workers from other Cambodian provinces.

On World Day Against Child Labour, LICADHO calls for the government to enforce existing child labour laws
Cambodian League for the Promotion and Defense of Human Rights (LICADHO) 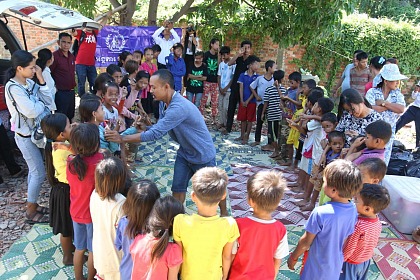 June 12, 2019 - Today, LICADHO marked World Day Against Child Labour by organising community events in two brick factories in Kandal province: Tboung Pich in Mukh Kampul district and Kheng Hok in Ksach Kandal district. Around 200 people attended the events, including brick factory owners, workers, and children. The events sought to raise awareness in the brick production sector about the criminality and consequences of employing child labour and debt bondage, and the importance of prioritising workplace safety. The events were organised at the two brick factories to ensure that both factory owners and their employees were brought together to have a better understanding of the risks of employing child labour and the use of debt-bonded labour. Presentations were made and leaflets were handed out to the owners and workers about the legal provisions in the Labour Law and Cambodia’s commitments to the International Labour Organisation’s Convention 182 to stop the worst forms of child labour.

June 1, 2019 - We, the undersigned civil society groups, express serious concern regarding the recent and ongoing judicial harassment of former Cambodia National Rescue Party (“CNRP”) elected officials and members through baseless arrests, summonses, and detentions across multiple provinces. We urge the Royal Government of Cambodia to immediately cease the harassment of members of the political opposition and instead take concrete measures to restore civic space and enable all individuals to exercise their rights to free expression, association, assembly and political participation. 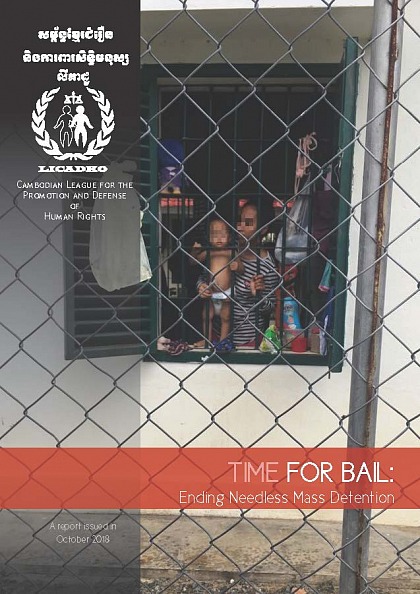 April 8, 2019 - On 18 February 2019, Prime Minister Hun Sen urged the Ministry of Justice and Ministry of Women’s Affairs to review the situation of women detainees in pre-trial detention. Through a speech and a post on his official Facebook account, the prime minister said women detainees face many challenges, such as having children living outside of prisons with no support and being abandoned by their husbands. LICADHO agrees with prime minister’s call for urgent action to address the needs of women in prison, specifically the situation of vulnerable populations – mothers with children and pregnant women in prison. This issue should be resolved through the use of existing legal measures, such as prioritising trials for women in pre-trial detention and expediting the processing of bail applications. 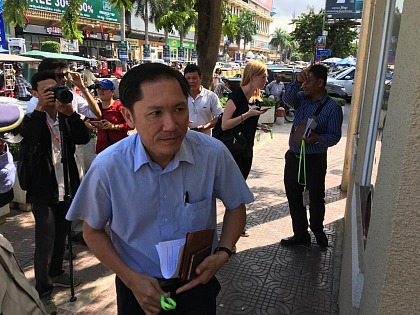 September 26, 2018 - We, the undersigned communities and civil society groups, condemn today’s conviction of four human rights defenders from the Cambodian Human Rights and Development Association (ADHOC) and a National Election Committee (NEC) official, in relation to a former opposition leader’s alleged affair. On 26 September 2018, senior ADHOC staff members – Ny Sokha, Nay Vanda, Lim Mony and Yi Soksan – were convicted of “bribery of a witness” under Article 548 of the Criminal Code. NEC official and former ADHOC staff member Ny Chakrya was found guilty as an accomplice under Articles 29 and 548 of the Criminal Code. They have been sentenced to five years of imprisonment by the Phnom Penh Municipal Court, with their pre-trial detention period of 427 days considered time-served and the remainder suspended. 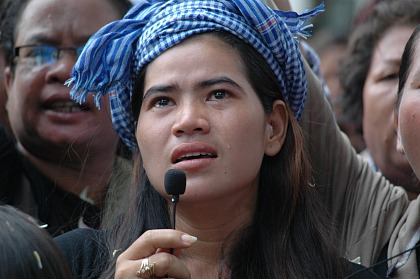 August 14, 2018 - Land activist and human rights defender Tep Vanny has been unjustly detained for two years as of tomorrow, for defending the rights of the Boeung Kak Lake community and her fellow Cambodians. We, the undersigned communities and civil society organisations, condemn her ongoing imprisonment and call on the authorities to immediately and unconditionally release Tep Vanny, drop all dormant criminal charges and overturn any convictions against her, so that she may return to her family and community. Tep Vanny has fought tirelessly to protect the rights of members of her community following their forced eviction from their homes on Boeung Kak Lake, Phnom Penh, but also those of fellow human rights defenders campaigning for separate causes. As long as she is behind bars, Tep Vanny is prevented from carrying out her peaceful and valuable work. 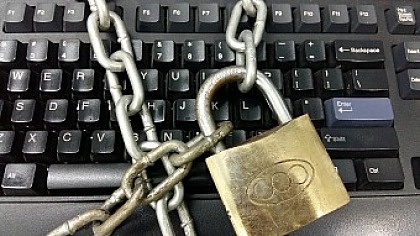 June 8, 2018 - We, the undersigned civil society groups, express grave concern regarding the latest government decision to heighten state surveillance, censorship and criminalisation of online expression in Cambodia, in contravention of constitutional and international human rights guarantees. On 28 May 2018, the Ministry of Interior, Ministry of Information and Ministry of Posts and Telecommunications issued an inter-ministerial prakas on website and social media control which became public this week. This ministerial order threatens the privacy rights and freedom of expression of every single internet and social media user in Cambodia and further diminishes the limited space left for public debate following months of attacks on media freedoms. 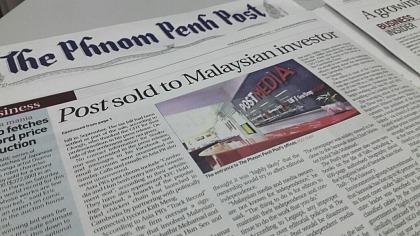 May 9, 2018 - We, the undersigned civil society groups, condemn the latest blow to press freedom in Cambodia, with the opaque sale of The Phnom Penh Post, and the new owner’s immediate interference in the paper’s editorial independence, which compelled 13 senior staff and reporters to resign and led to the sacking of the paper’s Editor-in-Chief. This is just the latest in a series of attacks which have devastated Cambodia’s media landscape since mid-2017. The Phnom Penh Post was Cambodia’s last remaining independent English-Khmer language daily, and its change of ownership raises serious questions about the paper’s continued independence.

Cambodia’s Stolen Children: Fraud and Corruption in the Inter-Country Adoption System
Cambodian League for the Promotion and Defense of Human Rights (LICADHO) 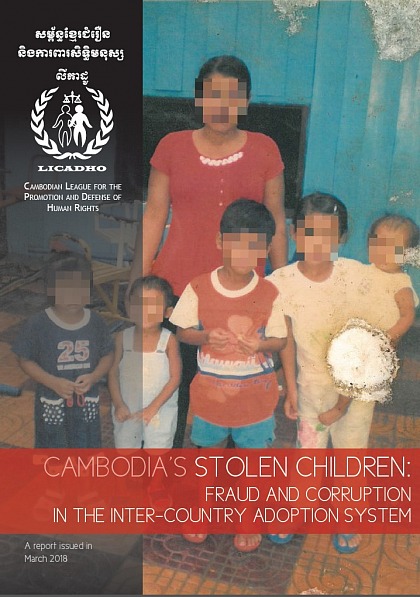 March 30, 2018 - Thousands of Cambodian children were adopted overseas between the late 1980s and 2009. During that time it emerged that many of the adopted children were not orphans but had parents who placed them in orphanages because of extreme poverty. Their parents placed them there on the understanding that they would return home at a later date. They did not consent to their children's adoption. Instead, orphanage directors, with the help of local authorities, created documents falsely stating that the children were orphans or had been abandoned. When evidence of this came to light, many countries suspended the adoption of children from Cambodia and in 2009 Cambodia itself suspended them. The parents of the children adopted abroad were often illiterate and lacked awareness of their rights or of where to turn to for help and so were unable to find out what had happened to their children. 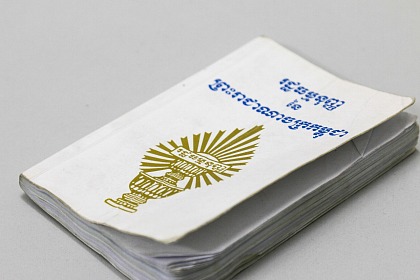 February 21, 2018 - We, the undersigned organizations and communities, express our grave concern regarding the Royal Government of Cambodia's proposed amendments to the Constitution of the Kingdom of Cambodia, as well as the proposed introduction of a lèse-majesté offense to Cambodia’s Criminal Code. These proposed amendments constitute a severe threat to human rights and fundamental freedoms, and are clearly designed to further criminalize any individual or entity that dares to express legitimate dissent. We are deeply concerned by this cynical attempt to deny the Cambodian people the fundamental freedoms to which they are entitled, and call for the outright rejection of these proposed amendments.

January 30, 2018 - We, the undersigned civil society organizations (CSOs), call for the charges against three of Cambodia’s most prominent civil society leaders – Mr. Pa Nguon Teang, Venerable But Buntenh, and Mr. Moeun Tola – to be immediately dropped. These baseless charges are clearly a form of intimidation and harassment, aimed at further silencing Cambodian civil society and human rights defenders. 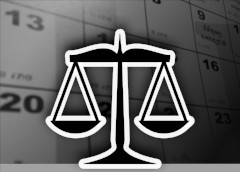 Keep track of cases of national significance & those defended /monitored by LICADHO. Explore the companies' countries of origin and crops of Cambodia's land concessions. 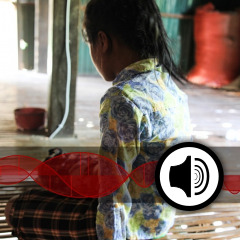 Listen to LICADHO's Khmer language audio book on the treatment of rape in Cambodia's justice system.